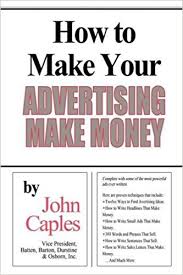 Recently I was listening to the Ray Edwards Show podcast as he interviewed Brian Kurtz, founder of Titan Marketing (you can find the full episode here: http://rayedwards.com/252/).

The relatively short amount of time required to listen to this podcast is a craazzzy good investment when you consider the vast amount of history and wisdom shared.

Ray, a top-shelf, class A copywriter, copywriting teacher and marketing strategist along with Brian, a multichannel direct response genius with decades of experience at Boardroom – (having worked alongside the best copywriters of all time) – shared a mutual appreciation for learning from copywriting’s greatest legends.

Heroes such as Claude Hopkins, John Caples, and Eugene Schwartz – Giants on whose shoulders we all stand.

Brian Kurtz was also promoting his new book, The Advertising Solution (Entrepreneur Press, 2016), co-authored with Craig Simpson, in which they outline the timeless principles of the three men named above, as well as Robert Collier, David Ogilvy, and Gary Halbert.

These tried and true principles, that never go out of style, are applicable to all media online or off, and are true essentials for the copywriter looking to master their craft.

And while, The Advertising Solution is a great read (review coming soon) and is kind of a summary synthesis of these men’s greatest hits…

I also highly recommend you study these lost classics that ‘they’ don’t want you to know about.

10 Lost Classics ‘They’ Don’t Want You to Read

What it takes to become the Johnny Depp, Leonardo DiCaprio, or Jim Carrey of “character” copywriting:

What Billions of dollars in advertising and years of research taught household brand names like U.S. Steel, Reader’s Digest, and Johnson & Johnson about effective advertising:

Why the risky or scandalous will ALWAYS sell, period:

The miracle of “Dyna-Psyc” and why it matters more than any literary technique for copywriters, direct-response marketers, and ANYONE, ANYWHERE, who wants to be successful in business of ANY KIND:

What the U.K.’s best Bird can teach you about how to make your sales letters soar:

What cargo ship bills of lading, laundry soap powder, and irritational persistence have in common, and why the name Cossman should matter to YOU!:

Gene Schwartz’s OTHER “Breakthrough” communications book that bridges the gab between reality AND eternity – the physical AND spiritual:

Why the step-by-step instruction of a Ph.D. and military veteran will drive your local post office nuts!

Half-a-dozen and one ways to finally achieve all your financial goals:

The Paul Harvey rest of the story to ‘Do you make these mistakes in English?:

Which of these have you read?

What are you favorite lost classics?