John Perkins was Chief Economist at a major international consulting firm where he advised the World Bank, United Nations, the IMF, U.S. Treasury Department, Fortune 500 corporations, and governments in Africa, Asia, Latin America, and the Middle East. Since then, his books have sold more than 1 million copies and been printed in over 30 languages.  He has been featured on ABC, NBC, CNN, NPR, A&E, the History Channel, Time, The New York Times, The Washington Post, Cosmopolitan, Elle, Der Spiegel, and many other publications. He is a founder and board member of Dream Change and The Pachamama Alliance, nonprofits devoted to establishing a world our children will want to inherit. His new book, The New Confessions of an Economic Hit Man, can be found on Amazon.

Once I left my old life as an economic hit man, I knew I had to do whatever I could to redeem myself for my sins and to make a world my daughter and all children would want to inherit. I asked: What can I do? Now it is time for you to ask the same question. Your gifts, passions, and skills have given you the tools you need to create a better world. Will you? I hope you enjoy this short glimpse into chapter 46 of the book and the events that became my confessions.

I’d like say a special thanks to Joshua Lee Henry for his support of my new release and for his willingness to post this on his blog. I hope you’ll connect with me on Twitter and Facebook!

What Will You Do?

This book has described the four pillars of modern empire: fear, debt, insufficiency (the temptation to keep consuming more), and the divide-and-conquer mind-set. The idea that anything and everything is justified—coups and assassinations, drone strikes, NSA eavesdropping—as long as it props up those four pillars has shackled us to a feudal and corrupt system. It is a system that cannot be sustained.

We must do whatever it takes to change the dream behind such justifications; to convert fear into the courage to create a better world; to replace debt with generosity, insufficiency with the knowledge that a life economy provides sustainable abundance for all; and to replace the divide-and-conquer mentality with compassion for others and a commitment to uniting as a crew that will navigate this space station toward a truly prosperous future.

During my travels, one of the things I hear from people is that Confessions of an Economic Hit Man “connects the dots.” In 2004, those dots led to the conclusion that people had been terribly misinformed about how the United States and its corporations deceive, abuse, and exploit economically developing countries. The post-2004 dots go much further. They lead us to the conclusion that we in the United States and in the rest of the so-called developed countries also have been hit—we have been abused and exploited by many of the tools I and other EHMs used in Africa, Asia, the Middle East, and Latin America.

Connecting the post-2004 dots leads to the additional conclusion that we must do whatever it takes to change. We must act.

Such actions start with the recognition that we are presented with many choices throughout life. Fate. Chance. Accident. Opportunity. We can see these things as good or bad. What is important is not so much that they happen as how we react to them.

I once accepted $500,000 to not write a book. I chose to use the money to help people in countries I’d exploited. Out of that came my reconnection with Amazonian people, the formation of several nonprofits, and a new career as a writer and public speaker.

When we look at things that happen to us as neither good nor bad but simply as bearers of messages, we open doors of opportunity for action.

The earth is offering us a strong message. The ice caps and glaciers are melting. The oceans are rising. Species are going extinct. This planet, our home, is demanding that we see her as a living Earth. She is not just a mass of rock and soil spinning around an indifferent sun. She is a biological member of a living universe. And she is sending a message: repent, reform, love her.

What will we do with that message, you and I?

During the 12 years since the publication of Confessions of an Economic Hit Man, the world has changed radically. I am excited to share with you how economic hit men and jackal assassins have spread to the U.S. and the rest of the planet and what we all can do to stop them and to create a better world. The New Confessions of an Economic Hit Man is an expanded and updated edition that includes 15 explosive new chapters. It also provides detailed strategies each and every one of us can employ to avert the crises looming before us. To learn more please visit http://www.johnperkins.org, and join me in moving not just into ‘sustainability’ but also into ‘regenerating’ devastated environments. 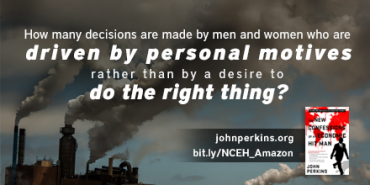