Kenneth R. Jennings is a best-selling author, speaker, and active consultant in organizational leadership, serving as Chairman of Third River Partners. John Stahl-Wert is a best-selling author, keynote speaker, and expert in growing great leaders, serving as Director of the Center for Serving Leadership. Together they co-authored The Serving Leader – now revised and updated for the 10th Anniversary Edition and available on Amazon.

The following is excerpted from their book, The Serving Leader. In this excerpt, Mike, who has been called to help his dying father’s leadership project, goes to visit a company whose leadership style has been an influential part of his father’s project. His guide, Ali, is his father’s colleague.

Arriving at a series of low-slung buildings, we were greeted at the door by Stephen Cray, one of the CEOs I had met the day before.

“Stephen,” I said, “you already know that I’m on a bit of a mission to understand the elements of being an effective Serving Leader. I have to confess, though, that I don’t know a lot about biotechnology. What I’m interested in,” I pressed on, once we were all seated and served, “is how your company understands and practices leadership.”

Stephen replied, “At BioWorks, we believe that the big key is selecting the right people to join the team, those with the right skills and values, those who embrace our purpose of creating energy and making a difference in our communities.”

I was listening intently, the hint of a question beginning to form behind the crease lines of my forehead.

“We’re extremely disciplined about selection because we operate at a very high standard here. Frankly, it’s hard to get into this company. We assess our recruits against a number of key competencies and values that have proven to be predictive of success in our organization. We do exhaustive interviews with candidates to see how they line up against those competencies and values. We push candidates to describe their specific behaviors and accomplishments in each of these areas. If they score well across all of them, they make it through our first screen.”

Stephen grinned again, clearly aware of the growing frown on my face and of how high a standard he was describing.

“After that,” he continued, unfazed, “candidates are interviewed by the people they’ll work with. The team takes this very seriously. The interview is low key, but they’re looking for the intangibles, candidates’ values and their ability to work on a team. We look to see if they can add something positive to the culture here. Finally, we do exhaustive checks of external references. Like I said, we’re picky.” He laughed again, disarming his tough message.

“I’ve got to ask you to hold up for a second, Stephen,” I finally interjected, unable to hold back my question any longer. “Ali just had me over at Aslan Industries, and I was hearing the very same thing there that I’m hearing from you. It’s paradoxical, isn’t it,” I pressed on, now quite animated, “for a Serving Leader to be so tough on selection and standards? It seems like a contradiction. Serving seems so soft and, well, loving. But all I heard from Harry Donohue at Aslan was a tough line—and now I’m hearing it again.”

Stephen gave me an emphatic nod of complete comprehension. “I know what you’re saying. And there’s surely no question whose son you are. Your dad is always talking about the paradoxes of effective Serving Leadership.

He had me there, and we smiled at each other. I may as well get used to these puzzles. Although I’ve been an explainer for a long time, maybe some of the good stuff isn’t so easy to explain.

“I’ll put it to you plainly,” Stephen went on. “In order to serve many people, the Serving Leader must first pick just a few other leaders to serve, people who can meet the Serving Leader standard. Think about it, a Serving Leader who wants to create a powerful churn of productivity needs a team that can put itself at the full service of others. These teams, in their own turn, will serve others by building them up, and the results will keep spiraling outward. It all starts with a Serving Leader who really raises the bar.”

I grabbed my notebook and quickly jotted down Stephen’s phrase, “Raise the Bar,” and what he had just said.

“The model used by Jesus of Nazareth is instructive here,” Stephen said. “He could have chosen from thousands of his eager followers, but he chose only twelve, spending the rest of his time relating to them, serving them, and preparing them to do the very same with others. And look at the multiplied results that today validate his methodology.” 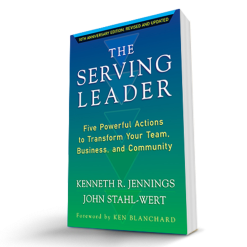 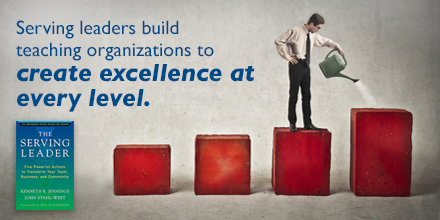 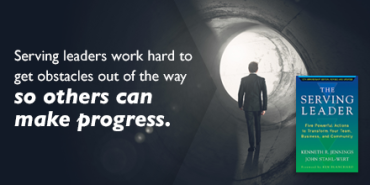