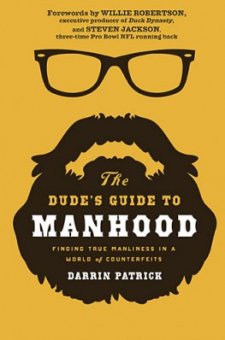 “The Dude’s Guide to Manhood: Finding True Manliness in a World of Counterfeits” (2014) by Darrin Patrick, is the latest title I have read in the growing genre of books based on biblical manhood.

A few months back, I began reading Patrick’s first book “Church Planter: The Man, The Message, the Mission” (2010) and loved it! Having served with two church plants that were started after the year 2000, I was incredibly eager to read a book that had been so well received among apostolic leaders I respected. In his first tome, Patrick had addressed perhaps the most critical component of a church plant – the planter himself. While I will not address the debate of complementarianism vs. egalitarianism among the church in this blog post, I do applaud the author’s emphasis on Scriptural and personal integrity, family matters, and the internal character that shows itself in a man’s outward choices. That is why when Patrick released this new book, I was sure to immediately grab a copy.

The rising awareness for the need of biblical principles in training men has emerged from the desperate situation those in our Western context and unfortunately, many of our churches have found themselves in. The anthropologist Margaret Mead, in her seminal work, “Male and Female: A Study of the Sexes in a Changing World” noted that “The central problem of every society is to define appropriate roles for the men” (1968). While it is true that as our communities advances further into postmodernity, our cities will no longer turn to the Bible for its cultural values. However, the Church definitely still should. And that is exactly what Patrick does in his book.

Ultimately, true manhood is totally embodied within the life of Jesus Christ. With the Savior of the world set as the apex, striving to be like Christ can seem daunting. Yet through the power of the Holy Spirit, we are able to have Christ live in and through us every day. It is therefore the sanctification process of spiritual formation that the Father uses to mold us into the likeness of His Son.

With dual forwards by Willie Robertson, the executive producer of the hit TV show “Duck Dynasty”, and Steven Jackson, a three-time Pro Bowl NFL running back, “The Dudes Guide to Manhood” is sure to lay another brick in continuing to pave the way for a new generation of boys growing into biblical men.