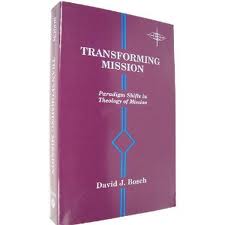 David Bosch was a professor of missiology a, prolific writer, and lecturer who had a tremendous impact on the study of missions. After his service as a missionary in Transkei from 1957-1971, he taught missiology at the University of South Africa. There Bosch was dean of the faculty of theology from 1974-1977 and again from 1981-1987. He also was also the inaugural secretary of the Southern African Missiological Society from its founding in 1968 and become the original editor of its journal Missionalia in 1973. Considered a “bridge person”, Bosch was much respected by the World Council of Churches, the World Evangelical Fellowship, and the Lausanne Committee for World Evangelization. He landmark book, Transforming Mission was selected as one of the “Fifteen Outstanding Books of 1991 for Mission Studies by the International Bulletin of Missionary Research, and it is still being used in mission courses today.

The thesis Bosch makes, is that the practice of mission has evolved many times throughout the past twenty centuries, and at this point in history, the Church is again experiencing transformation in paradigm shifts as it enters into  a new world.  Bosch begins by making the case that the rapidly advancing fields of technology and science have given rise to globalization. In addition, the popular philosophy of postmodernism has impacted the process of worldwide secularization. Consequently, societies can no longer be classified in geographic or cultural sections of “Christian and non-Christian”. Therefore, the Church must embrace the current crisis of danger as opportunity which is expressed in this contemporary context. Bosch states that for the Church, mission is manifested in the areas of foundation, motives, and nature. To begin his critique of mission’s foundations over the past two centuries, in part one, Bosch reflects first on the missional theology of the New Testament authors. He claims that because they wrote their letters as an “emergency response” to their church, their writings require being theologized in order to be interrupted, both in their original setting and in generations since. Bosch then considers mission in the Old Testament, by addressing God’s covenant with Abraham and Israel’s treatment of the nations. He then goes on to build an understanding of Jesus’ Jewish identity and thus his priority of preaching repentance and salvation, but first to his own people. However, Bosch also notices the sharp criticism of Jesus to the Pharisees as well as Christ’s constant socialization with Gentiles. In looking at the New Testament as a missionary document, Bosch pays special attention to the Gospel of Matthew, a Jew attempting to influence his community to mission. Secondly, a look to Luke’s two volume work of his Gospel account and the Book of Acts is in order to explicitly connect Christ and His Church. Bosch then includes a discussion on Paul’s letters, as they represent the majority of the New Testament.

In Part two, Bosh considers the historical paradigms of mission by examining eschatology, Gnosticism, and Orthodox shifts in the Eastern Church, as well as the medieval Roman Catholic paradigm. He concludes this section with two outstanding chapters on the impacts of the Protestant Reformation and the wake of the Enlightenment. Finally in part three, Bosh speaks to the end of the Modern era and the world’s entrance to postmodernism. He concludes his magnum opus by offering insights to what he calls the “Emerging Ecumenical Missionary Paradigm” and focuses on topics such as the missio Dei, justice, evangelism, contextualization, liberation, theology, and Christianity’s response to other religions.

Perhaps the greatest contribution Bosch makes in his book is his treatment of the postmodern paradigm. As a missiologist engaged in the work of the Spirit, Bosch makes a scholarly, practical, and scripturally sound response to tolerance and autonomy through the reaffirmation of the conviction of commitment and the retrieval of togetherness. The Church is called to be a peculiar people in the world but not of it. In times of uncertainties such as the current case, the need for interdependence, Bosch states, is the key for salvation and survival. He goes on to claim that the “psychology of separateness has to make way for an epistemology of participation” (p. 362). The pertinence is for the Church as the Body of Christ to revive community and share God’s mission for a common and eternal destiny of all peoples. A second positive is Bosch’s analysis of Paul’s letters, as a Jew commissioned to serve as the apostle to the Gentiles. He describes the apostle as the first missionary theologian and exposes Paul’s missionary strategy, including his use of evangelizing in metropolises, use of teammates, and mentoring of colleagues. While the chapter on Paul’s theology and methods was useful, the chapter “Matthew: Mission as Disciple-Making”, left me wanting. While the discourse was adequate to a biblical theology of mission, I would have rather read a discussion on the Johannine letters that addressed God’s mission in Revelation. A second criticism is on Bosch’s treatment on the elements of ecumenicalism. Though Bosch was very forward thinking with his insights, we are now twenty plus years past the books original publication. In the last several decades, the Western church from a Protestant perspective, has experienced a mired of changes including the decline of mainline denominations, a rise in mega-church associations, nondenominational networks, multi-site movements, and the organic, emerging, and missional church conversations. In addition, the Roman Catholic Church has undergone the installment of two new Popes. Surely a more timely report on ecumenicalism would vary from what Bosch has expressed.

Still yet, David Bosch significantly added to the study of missiology in his classic work, Transforming Mission. It addresses a theology of mission from a Scriptural, historical, and theological approach. The implications Bosch makes for the understanding and practice of mission will continue to greatly influence missiologist into the twenty-first century.