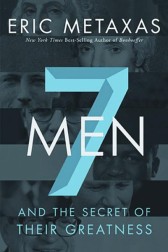 In his new book, “7 Men: And the Secret of Their Great Success” bestselling author Eric Metaxas continues to carve out his niche of writing clear and compelling biographies that inspire readers to take time for serious reflection and be moved into action. In his latest masterpiece, Metaxas presents the stories of seven extraordinary men whose lives exhibited high degrees of character, courage, and calling.

In studying these historic figures, Metaxas asserts that great lessons for success can be learned and likewise, should be emulated by males in every generation. The seven men whose lives are observed are: George Washington, William Wilberforce, Eric Liddell, Dietrich Bonhoeffer, Jackie Robinson, Pope John Paul II, and Charles “Chuck” W. Colson. Though not listed as one of the seven, Metaxas does acknowledge Jesus Christ as the greatest man to have ever existed, in part because of how he taught others how live. Recognizing the current moral decay and societal lack of family values in American culture, Metaxas writes that

“There is something vital in the idea of fatherhood and it gives us a clue to the secret of a great man. But we have to point out that a man needn’t be an actual father to bear the traits of every good father… If we think of the fatherhood of God, we get a picture of someone who is strong and loving and who sacrifices himself for those he loves. That’s a picture of real fatherhood and real manhood” (p. xviii).

In analyzing the lives of history’s heroes, we can learn to live with a higher purpose, grow in faith, and be motivated to stand up for what is true and good. Arguing that in today’s superficial and celebrity driven culture, virtues like chivalry, bravery, valor, and obedience need to be reaffirmed and engrained into the lives of young boys. This of course happens best through mentoring relationships and role models. Drawing the distinction between questioning authority and questioning its legitimacy, Metaxas presents a case for servant leadership and real manhood that is neither domineering nor emasculate. Rather Metaxas explains that God’s ideal for manhood consists of compassion for the marginalized, protection for the weak, and strength found in striving to honor God’s divine intention. In many ways, these men give a representation to the testimony of perseverance being greater than power.

While I was initially more familiar with some of the stories than I was with others, Metaxas’s dynamic writing style drew me immediately into each gentleman’s narrative. Every biographical account yields a conviction to lead with character, courage and calling, while influencing others out of relationship and by doing the right thing. Qualities like growing in wisdom and being lionhearted are also expressed. Ultimately “7 Men” is a great book, comprised of condensed descriptions of men who lived by the definition of Micah 6:8, “to seek justice, love mercy, and walk humbly with your God”. I highly recommend it!

Disclosure of Material Connection: I received this book free from the publisher through the BookSneeze®.com <http://BookSneeze®.com> book review bloggers program. I was not required to write a positive review. The opinions I have expressed are my own. I am disclosing this in accordance with the Federal Trade Commission’s 16 CFR, Part 255 <http://www.access.gpo.gov/nara/cfr/waisidx_03/16cfr255_03.html> : “Guides Concerning the Use of Endorsements and Testimonials in Advertising.”

2 thoughts on “Seven Stories of Character, Courage, and Calling”