Accidental Pharisees: Avoiding Pride, Exclusivity, and the Other Dangers of Overzealous Faith by Larry Osborne 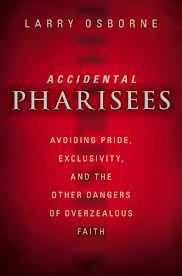 Larry Osborne’s new book, “Accidental Pharisees” is definitely one to challenge overzealous Christians and especially the celebrity consumed pastor. Endorsed by a wide variety of well-known church leaders, and with a subtitle addressing pride, I knew this book would be a must have for a reminder and conviction that despite the ministers’ competence, it is always God who is in control of His church.

Larry has been a wise and influential voice in the Church for some time now. As a forward thinking leader, he has shaped the ministry philosophy of many leaders in my generation with his recent books “Sticky Teams” and “Sticky Church”. In this new book, Larry tackles many of the internal issues church leaders face. Coincidently enough, (due to the sin of humanity) many of these character flaw issues are the same that Jesus called out and corrected in the religious elite of his day, known as Pharisees. But as Larry explained, during the first Century time of Christ, being a Pharisee was a high honor. It meant you were a learned man of God.

As someone who has been to seminary, it is a daily task of reminding myself the knowledge I’ve been blessed with is not due so much to my academic prowess, but instead a combination of God’s grace in revealing His Truth to me and my receptivity of being entrusted with teaching and wisdom gifts. This knowledge of Truth should always be used for building up the Body, not one’s one ego.

Larry presents several very challenging chapters. Some of the most gut checking include: “ Overcoming Pride: The Proper Use of Scripture and Proper Understanding of Obedience”, “The New Legalism: The Danger of Litmus Test Christianity”, and “Are Your Study Notes in Red? Why the Quest for Theological Uniformity Undercuts the Bible”. Also, the entire section of Part 5: Idolizing the Past: When Idealism Distorts Reality”, should be carefully read and discerned by many who feel they are responsible for “separating the weeds form the wheat”.

Accidental Pharisees is a much needed book in a time when the Church in the West is in transition. More and more people who are discontent with how they see ministry being done in the church should check their anger, accusations, and attitudes with the way Jesus responded to the Pharisees of his day. Biblically grounded and stern with warning, Larry Osborne’s new book is a must read for Christian leaders.

I did get a copy of Accidental Pharisees for free through the Cross Focused Reviews blogging program, but in no way was required to write a favorable review.

4 thoughts on “How Anger, Attitude, and Accusations Can Create an Accidental Pharisee”