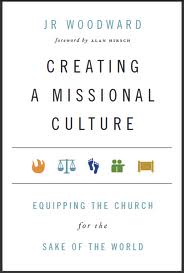 I pray God continues to use JR Woodward’s new book Creating a Missional Culture (2012), as a beckoning call for the Church to return to Her 1st Century culture of congregational equippers.

JR makes clear the biblical case for polycentric leadership, and the need we who are experiencing the current church crisis in the West being post-Christendom, have in engaging our communities missionally. Polycentric leadership is not so much new as it is New Testament.

Adding to the current conversation on Ephesians, highlighting especially the 5 fold equipping roles of Ephesians 4, JR renames the gifts Paul lists: apostles, prophets, evangelists, pastors and teachers with “dream awakeners”, “heart revealers”, “story tellers”,  “soul healers”, “and light givers” respectively. As a millennial ministry leader, I appreciate JR updating these terms in a language easily understood by my postmodern peers. These terms also emphasis the function for the Body and downplay a single role to be held in the church. Though not explained in the book, the 5 icons expressed on the cover also do well to communicate the functions of the fivefold for an image driven generation.

Instead of taking shots at the distorted teacher-pastor, solo leader model we have common in the North America, JR is graceful yet convicting in his presentation of a polycentric leadership system that multiplies ministries through equippers. With this form of leadership, the unbiblical method of voting is dismissed and replaced with communal discernment in the Spirit.

As a sociologist by training, I thought JR’s definition of culture was spot on. Things like artifacts, language, rituals, ethics, institutions, and narratives define a society and shape a community. When the fivefold equipping roles are understood, and lived out with their telos in mind, a congregation can maximize its missional effectiveness in a community by the cultivation of five different learning environments, corresponding to each of the Ephesians 4 giftings.

JR’s chapter on decentralized decision making and Trinitarian submission should be must reading for every missional leader seeking to serve the Kingdom. Making clear the difference between flat leadership and polycentric leadership, JR expounds upon the recently developed “emergence system” of organic growth and shared responsibility found among ant colonies and the human brain, proposing this systemic form of structure should be possible in the Church.

Other interesting topics discussed include JR’s distinction between discipleship communities and the current church buzz word, missional communities, as well as his challenging of the control ethos in many established churches.

Though the APEST term isn’t directly used, the reader will quickly see the similarities between JR’s work and that of some of the other apostolically inclined authors writing on the same Scripture.

As a side note, I found the description of conversion from “belong, behave, believe” to be very encouraging as it is the same language used in the ministry I work with and the church I serve with. In addition, I found the missiological references to Lesslie Newbigin and Watchman Nee in the beginning of the book and the quotes from Roland Allen towards the end to be highly beneficial.